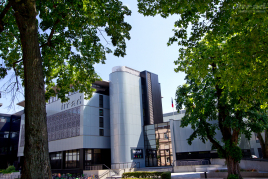 
In 1994, the IRCAD (Research Institute Against Digestive Cancer) was built on the grounds of the University Hospital of Strasbourg by Professor Jacques Marescaux and his team.

It is a training center, which welcomes more than 6,000 surgeons from all over the world each year, allowing surgeons to improve their skills. The Institute has maintained its position as an ambassador of French excellence and has gained worldwide fame as a leading research and education institute. Its international success has led to the construction of twin institutes in Taiwan (Asia), Sao Paulo and Rio de Janeiro (Brazil), Beirut (Lebanon), Rwanda (Africa) and soon in Wuxi (China).

The institute also brings together fundamental research laboratories focused on the treatment of digestive tract cancers, as well as R&D units in computer science and robotics that design and develop tools for diagnosis, surgical planning and simulation aimed at improving and making surgical procedures safer.

The IRCAD benefits from an infrastructure of more than 13,000 sq.m located right next to the city center and the Haras Brasserie-Hotel****. It is a place of prestige and excellence, equipped with the latest audiovisual technologies and high-definition videoconferencing systems.

From September 2020, an extension of the IRCAD will be available with a 237-seat auditorium and a modular stage area.