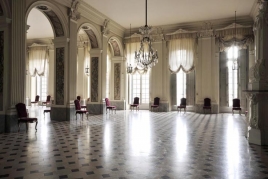 
Strasbourg's Rohan Palace, constructed between 1732 and 1742 after blueprints by Robert de Cotte, First Architect to the King, for Cardinal Armand-Gaston de Rohan-Soubise, Prince-Bishop of Strasbourg was modeled after Paris' grand mansions. This Episcopal Palace is one of the most beautiful creations of French 18th century architecture byway of the classic, noble height of its facades and its sumptuous interior decors. Built, decorated and furnished in the span of ten years time, the dwelling is graced with an exceptional unity.

Equipment can be hired outside the museum’s public opening hours, until midnight at the latest, including collection and return time.