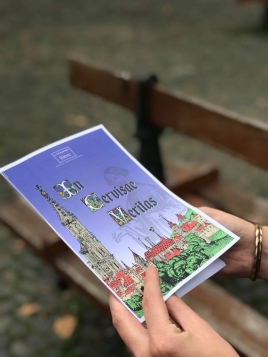 
Historical breweries, family or more recent, hop gardens and traditional Bierstub, bars and beer cellars, Alsace has a brewing culture among the richest and oldest in France. It is this heritage that L'Echappée Bière Strasbourg wishes to highlight by several types of services:

"L'Echappée Bière Strasbourg" will rely on the experience and know-how of L'Echappée Bière Lille, founded in November 2013. It is therefore natural that the agency is now establishing itself in another major brewing territory : Alsace !

Focus on one of the activities of "L' Echappée Bière", the Rally-beer: "In Cervisae Veritas"

A treasure hunt that mixes (re) discovery of Strasbourg and tastings of local beers.

During the Renaissance, Beatus Cervisius explores what fascinates him : the job of brewer!

But since the publication of the Reinheitsgebot, the Germanic Roman Empire frames the production of beer. Beatus then goes into hiding to continue his work and create his own beer, HUMANIS. In order to ensure the transmission of his recipe to his descendants, our hero took care to hide it in a secret place.

It's up to you to find it! Booklet in hand, you go to the assault of the Strasbourg streets; your journey will be punctuated with enigmas and four beer tastings, decisive indices of your quest !


Given the current situation, our offices are closed.
We can still be reached by email: contact@mystrasbourg.com , to provide you with our help and expertise.
Take care of yourself and your loved ones.